What i cant get my head round is the fact that the lake i fished today is well down around 2ft from last year,another 18in from the year previous,how is it that we get loads of rain,but the level doesnt really rise,in my poor mind 2ins of rain equates to at least a 2in rise in water level,not on this lake.....

The seacourt? Empty? Not sure i'd agree entirely with that. I generally catch when I fish it around Wytham. Nothing massive but I couldn't possibly say it was empty? I had a chat with an old fella there a few weeks back who was quite happy to tell me that the chub and barbel "had all been ottered and it was a disgrace..." However, in order to get to the swim I chatted to him in, I crossed the bridge at the farm there and SAW a number of really big chub. So they are there.

(And sorry, i'm not sure from your post if you're saying something similar - i.e. that someone else is suggesting that the fish have all be eaten.)

sylvanillo said:
On my return to oxford I got only a few good days before a great deluge started. The usual meadows, prairies became lakes as expected, but this time the level went up to the highest recorded in the last 70 years (for the 3rd time).

Interestingly, while fishing a local stream right after the water levels were going down, I met a local resident who said the fish populations decrease were due to cormoran and otters. Well...., perhaps those beings have something to do with this, but I say.... since 2012 the different small streams have gone through several years of heavy flooding followed by months of heavy temperatures. River washed up, river deprived of oxygen... anything relating to the Seacourt stream, Botley stream etc being now entirely empty??
Click to expand...

Hi Jim,
Thanks for the local report
No, I am not saying the fish have been ottered (or cormoraned!), it was a statement from a nice guy I met. His garden is on the stream.
What I am saying is that the weather conditions since 2012 which are bad in winter and then bad in summer have more to do with the sharp decrease in fish populations.

Now re. the Seacourt, you're talking of the north stretch, which is very nice, I've always been catching on flies. Nothing big though, and much much less than only 10 years ago.
The Seacourt has at least 3 different stretches.
In the past one of them was especially good for pike. It even.appeared in a 1800s book for this reason.
Nowadays I doubt you would meet anyone saying of the same stretch that it's good for anything!

Same for the other locals streams. 10 years ago,.I had big chub and also barbel even in the city center.... Nowadays, from a bridge try to spot some... you might but not a lot!
J

Cheers for that Sylvanilo, all makes sense. I've only been fishing the seacourt the last three seasons or so, and I definitely agree that the fishing is patchy. That said, I've never known it be any better or worse (over the course of those three years, not really enough time to get a sense of the decline I guess?)

What I will say is - it's thrown up a few very pleasing surprises in that time - a small barbel, a 5lb+ chub, a trout that took a liking to cheesepaste (had it twice in the same swim on different sessions...). There's also a couple of bits that seem to fish pretty good with trotting gear, never massive fish but dace, perch and roach have all put a bend in the rod.

I guess what I love about it best is that it reminds me of some of the streams I fished on when I was a kid... where if you wanted to be successful, you needed to approach the river with an open mind. If you turned up saying to yourself - "today I will quiver tip with bread in this swim".... then chances are you might not catch at all. But if you turn up with a couple or three different baits and different ideas about how you might present them, depending on the situation you're faced with - then you might do better.

We've supposedly had the wettest Autumn on record here in Nottinghamshire and, working outside, I can well believe it.

Although generally still high the Trent is just fining down to trottable levels again in selective swims and with a fortnight off work beginning tomorrow what do we have forecast?

I have just about HAD IT. The rain is one thing but the blooming quagmire that goes under the name of a river bank is something else. GRRRR. Stuff to clean again tomorrow.
X

Fished the Thames at Staines yesterday-might as well not bothered as it was belting through.

The farm at Short Ferry near Lincoln was in the national news with the flooding. The news soon moves on to something else but the fields are still flooded and the road nearby still submerged.
Today came the announcement that the dyke wall has been mended and pumping will commence.

john step said:
The farm at Short Ferry near Lincoln was in the national news with the flooding. The news soon moves on to something else but the fields are still flooded and the road nearby still submerged.
Today came the announcement that the dyke wall has been mended and pumping will commence.

I watched that on country file, I think it was the same place, tragic for the farmer, I feel sorry for them.
On another note I often watch these things with a bit of bemusement. I remember the scientists all writing in the newspapers back in 76, predicting we would all be using standing pipes for water by now because drought.
S

One thing people seem to forget is that all this land is reclaimed marsh land and the rivers are above the level of the land same with most fen land rivers. Put these to together and you will get flooding. Build anything on flood plains or near rivers and you will get wet.

markg said:
I watched that on country file, I think it was the same place, tragic for the farmer, I feel sorry for them.
On another note I often watch these things with a bit of bemusement. I remember the scientists all writing in the newspapers back in 76, predicting we would all be using standing pipes for water by now because drought.
Click to expand...

Yes and when we moved into this property in 2003 the experts told us to plant Mediterranean plants like lavender as we were expecting dry conditions for the foreseeable future. The plants all died from too much wet!
W

Its quite incredible how much rain has fell here,its supposed to be worse tomorrow...blimey!
W

Ive looked at the ea site this morning and all local rivers are bank high or racing towards it,with it not expected to stop raining until midday and more tonight ive been busy repairing the ark...
S

Persistant fine rain ! The local carpark is awash and all the potholes are full of water and resemble small lakes. Throw in millions of cars ferrying their frantic occupants to buy more stuff than they will ever need and forgetting shops are closed for 24 hours and not a month, and you have miserable chaos. Bah humbug.
S

My local river - the upper Warwickshire Avon, has not been fishable on the float since the end of September at weekends. Only two matches have not been cancelled - and both of those were fished on a rising river - where you are basically looking for one or two barbel bites (not my idea of fun).

I used to go on canal matches in these scenarios - but the circuit has died in the south midlands.

This weekend I'm heading for the old course of the River Nene. Normal conditions it's like the GUC - 5x12 pole floats (ie. 0.3 g) I will be packing stick floats for sunday!

Are you inundated in Kent John as the South East has apparently had a lot of rain recently.

We certainly are Mike, I spend the Summer moaning that the river is too low to fish and now it’s starting to spill over the banks and Canterbury is only a bit more rainfall away from breaching the banks. 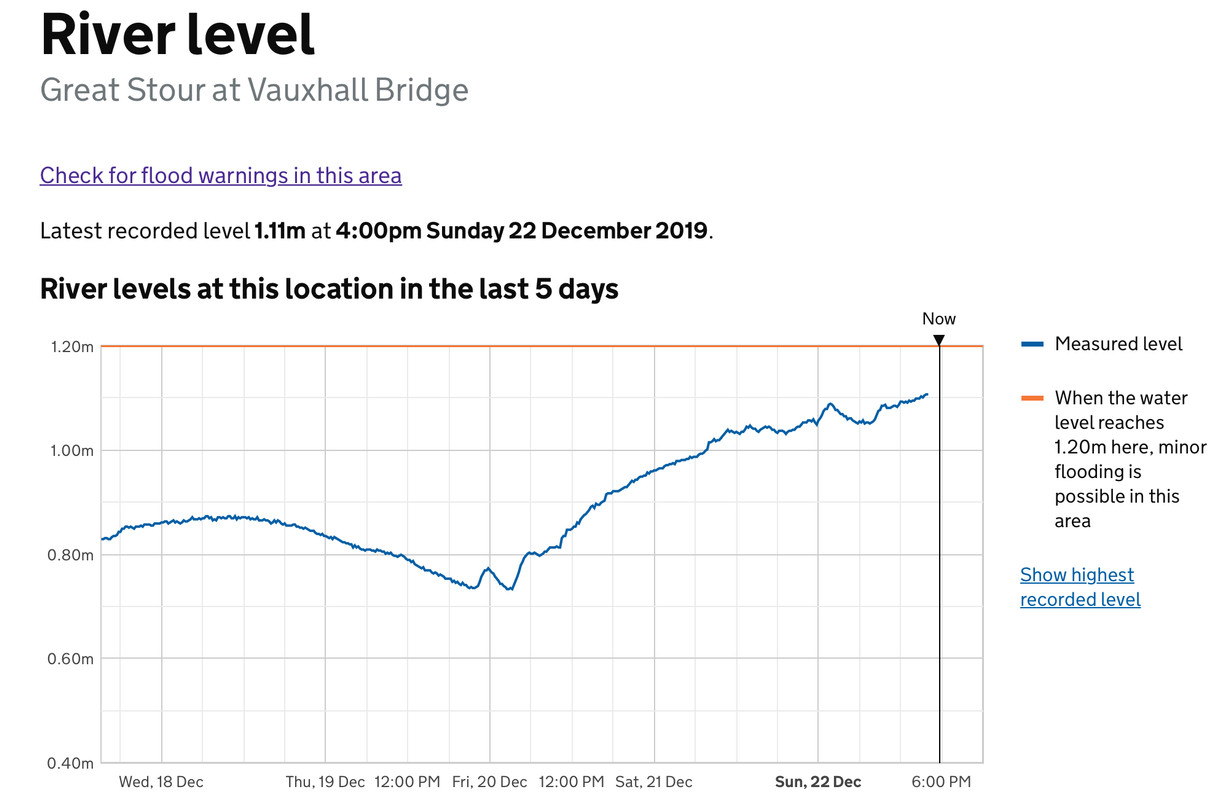 I think next week will be drier; I hope so for all our sakes.