Confessions of an Angler

A few seasons ago I was fishing a favoured Winter river flood swim for Pike, nice and slack and a good ten foot right under the tip.

I was using the standard set up comprising of two 2.75lb deadbait rods, both fished tight in to the bank with the baits a few yards apart and both with slider floats just for the ease of being able to transport the rods easily after being rigged at home.

Unbeknown to me at the time the right hand rod had a cracked ring liner and this first presented itself when the float that it was attached to gently bobbed and began to dance off in the direction of the other float a few yards away and again tight to the bank.

This is when the fun started!

I went to strike into the run and almost without any resistance the line parted!

Oh dear, now I'm detached from a Pike which has taken a bait with trebles attached to it and there's only one very bad outcome but I couldn't dwell on it because almost immediately after breaking off the float on the other rod sailed away and this time I struck into what felt like a decent fish.

I'm not sure whether my head was still distracted by the fate of the other fish a few moments ago but I somehow managed to allow the fish to snag me up in some submerged brambles right below me mg:

If things weren't already bad enough I had little other option than to put the rod down and try and follow the line by hand as far as could with my hands and hope for the best in freeing it.

One leg in and kneeling on the other the cold Winter floodwater filled my boot in seconds and I was wary of going too far such was the steepness of the bank but I managed to pull the line free and scramble back out the water where I then brutally hand lined the fish into the landing net... Thank God for thick winter mitts!

I immediately matted the fish and went to open the mouth to unhook it when I noticed my other trace coming out of the mouth, the same fish had picked up both baits!

I could barely dare to look as I opened the jaws out to see where the initial bait was, if it was there at all, but staring in disbelief I could see that it was just the right side of the throat and both baits, and sets of hooks, were removed with ease and the fish went back none the wiser but not before a picture.

And here she is, I nickname this fish... 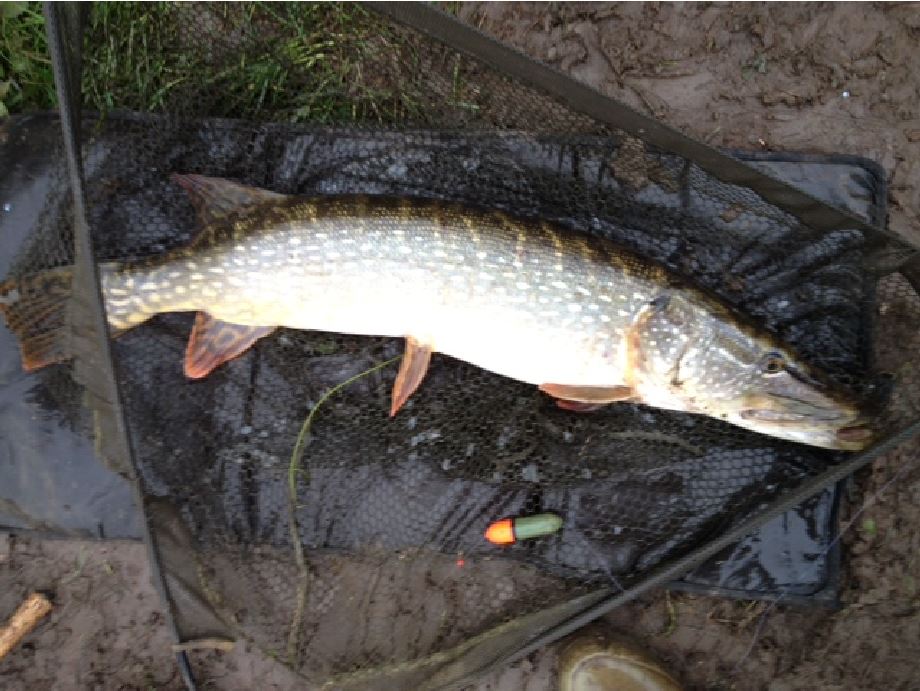 What a complete dog's dinner!!! mg:

What's your worst, or best depending on your view, angling calamity?


I think one of the the oddest things to happen to me fishing wise was whilst livebaiting for perch. I was using my normark avenger float rod and a centrepin reel, 6lb sensor, a avon float and normal trotting set up with a 14s animal hook. I'd been catching small chub and dace as I needed one, removing the hook and re hooking the fish just below the surface of the skin outside the mouth hoping that they would come off as I struck allowing them to live on. This method of releasing the baitfish worked so well that very often the bait fish would just drop off as I gently swung them out (only under the rod tip) and I would have to get another. Anyhow I was doing well catching some crackin' perch of nearly 4lb. I could actually watch the perch take the bait fish, often circling the baitfish swith suspicion before taking them. I didn't need to watch the float as it was better to watch the bait fish and I could stop the bait fish from dragging the float away or under by keeping the line tight to it.
I caught a small perch to use as bait and it turned out turned out to be my last catch because of all the commotion caused shortly after when my bait fish was engulfed by a perch of arong 1 1/2lb, but as I struck into the perch it bolted off. Unknown to me esox had been lying in waite under my feet and shot out and latched onto my perch! I struck out of the perch and the hook set in esox's scissors. I caught the pike after it gave a crackin scrap! I laughed to myself as I thought about the food chain that I had just witnessed.
If I remember the pike was 11lb and a few ounces and had one blind eye which didn't stop it striking like a cobra!
Chances of that ever happening again are pretty slim.
Last edited: Mar 30, 2020
L

Lovely stories guys, nothing to match them I am afraid, but it did make me think of this
Confessions Of A Window Cleaner Screenshots | Flickr
It was the first 18 film I got into aged 15 borrowing my older brothers Navy Surplus Greatcoat and talking in a deep voice. God we were innocent then! I doubt it would even get noticed today!

A friend and I were waggler fishing for Tench one very early morning on a local gravel pit and I hooked a nice Tench which was giving a good account of itself, and my mate offered to net it for me; and when I thought the Tench was ready to land he picked up my landing net and placed the net into the margins ready for me to steer my Tench across it.

After The Tench was lifted out and placed onto the unhooking mat ready for me to unhook; there was a big 3lb Crucian Carp also lying in the net underneath my Tench which my mate must have accidentally netted in the margins when he was netting my 4lb 12oz Tench for me.

lambert1 said:
Lovely stories guys, nothing to match them I am afraid, but it did make me think of this
Confessions Of A Window Cleaner Screenshots | Flickr
It was the first 18 film I got into aged 15 borrowing my older brothers Navy Surplus Greatcoat and talking in a deep voice. God we were innocent then! I doubt it would even get noticed today!
Click to expand...

I remember watching that film and that was my high street that he was cycling down on those shots.

Its changed quite a bit now.

This last Autumn was my latest clumsy episode. Whilst sink and drawing I caught a branch . Now I couldnt leave a bait dangling and it was tangled in the branch. I reassoned I could inch my way out far enough to grab the branch and rescue my end tackle.

Wrong.... I went in and therefore was able to rescue the gear from the water.
I had to leave my tackle with another member and go home to change. I think I had a double later that day.

Not many such encounters in my Angling career but one springs to mind. I have recounted the tales of two club members and comedians called Geoff and Dennis( two lovely blokes) who have amused me on the bank. On this day I rocked up to a venue where the two of them were already set but without a fish. I set up just behind Geoff on an adjacent lake with Dennis on the other side of the same lake. I said my hellos and Geoff announced my arrival as" Dennis 2 minute Charlie is here" implying I had the annoying habit( perception) of catching immediately.

I told Geoff I was going to christen a new rod to me( a Normark Titan) and a new Stradic C14. I chose a size 18 hook on a 2.5lb hooklength attached two maggots and cast in pursuit of roach.

The bait was taken on the drop and I was in. It turned out to be a common of 10lb which I landed to the constant commentary by Geoff along the lines of 2 minute Charlie has done it again Dennis, b***** hell, first cast for roach and he's got a carp.

lambert1 said:
Lovely stories guys, nothing to match them I am afraid, but it did make me think of this
Confessions Of A Window Cleaner Screenshots | Flickr
It was the first 18 film I got into aged 15 borrowing my older brothers Navy Surplus Greatcoat and talking in a deep voice. God we were innocent then! I doubt it would even get noticed today!
Click to expand...

It wouldn't Mark. Innocence is good and in our day , well certainly
In mine, it lasted long into my teens unlike today. Childhood is very short indeed and the simple freedoms we had are long gone.
Last edited: Mar 31, 2020

A few years back I was utterly obsessed with the Zander at Bury Hill and desperate to catch a double figure fish. I got close several times with “big nines” including one fish which looked easily double figures. I was over the moon on landing it but on unhooking Noticed a tail in it’s throat. I got the forceps on it and slowly extracted a very big mackerel tail....virtually a wholefish

Of course Muggins didn’t weigh the Zander until I’d removed the mackerel. It went 9-15.....howl !

I did get my double a couple of trips later but nearly all the big Zander in BH are dead now, there are still the odd one or two but a 6pounder is a good fish now. I hardly go any more....from once a week ( min) all winter I went 3 times this year and blanked twice.
B

I was out early season nymphing for Trout a few years back , and got a take only to feel the twitchings of a small fish on the end.
As I was bringing it in, it suddenly went quite heavy and dead feeling, as though I just had a bit of debris on the line, although I could still feel a bit of life.
When I got a glimpse, I could see a 14 inch or so trout, with it's mouth firmly clamped around the middle of the small one which was on the hook.
I almost brought it to hand before it finally let go, and landed the little one, which bar a few marks on it sides, appeared no worse for wear!
M

This was just completely daft, I used take the water temperature regularly but on this occasion I pulled my thermometer out and it was broken. I had an expensive watch, a casio marine watch that I use to take the wind direction with, it had a nifty digital compass but also a thermometer. So I tied the watch to a piece of line and dropped it into the river for 10 mins. When I pulled it up no watch. Nothing for it but to strip down to my undies and dive in. I was opposite a picnic area on the other bank and got some weird looks but a good watch is a good watch. Anyway, after 3 dives and a lot of scrabbling about in the muddy bottom I got it. Promise to self not to be a ****** ever again. However, about 6 months later I left the watch on a bus and never saw it again, never was very good at promises and still a ******. I hope to come back in another life one day completely different.
You must log in or register to reply here.
Share:
Facebook Twitter Reddit Pinterest Tumblr WhatsApp Email Link
Top