I have a dodgy back, and yesterday while out fishing I managed to throw it out again while trying to get out of my chair. I have a very old but very comfortable Shakespeare adjustable seat which also has it's own carry bag. 12-14 years ago it was around £50, so not cheap at the time. However, it has no arms, and even on its highest setting, it's a bit low for me now.

Looking around I have come across the Korum X25 Deluxe system that looks quite interesting as the seat height is adjustable from 48-72cm, quite high for a fishing seat, and it has arms. I like the idea of "the system" so I can have a tray one side and maybe a rod rest etc attached also, but as a seat, it's bloody expensive at just under £120.

Any recommendations or suggestions at what else I could look at? I ended up cutting my session short yesterday because of the pain and lack of mobility.

Sounds like you know what you need. I’ve got a Nash Camo Indulgence Sub-Lo and it’s great but too low for you, BUT it has arms, which makes all the difference heaving yourself out of it and getting back in safely.

Have a look at HOW DID YOU GET ON a couple of pages back. Mikench has a photo of exactly that chair. By coincidence I have been chatting with him via PM about it.
For those sessions where you park right next to your swim I would advise having a look at Nash Daddy long legs chair. Its armchair comfortable BUT the one I have is VERY heavy. As stated it has limited use due to how far I am willing to carry it.
N

I'm not typical, but I have a definite take on seating for bad back anglers. I had a laminectomy aged 20, and have had a rheumatoid arthritis thing since, so I've had 40 odd years of trying to fish without provoking back trouble which never needs much to set it off.

I've tried numerous chairs, all well endorsed by other users, and I've got three here now. They get used by visitors in the garden mostly. I found chairs all had some common features that just didn't help the back issues. They tend to be too low, and when they aren't they tend to sag. Couple this with the tendency to lean you back, and you have a recipe for a poor seating position plus problems getting in and out. Along with that, I never felt I was really in the right position for anything other than waiting - casting striking, trotting, landing a fish etc, all needed you to shuffle to the edge of the seat; not very good if you enjoy "busy" styles of fishing. There's more! The average chair has quite a large footprint compared to other types of seat, and thus needs more space at the water's edge than is often available, and they often have relatively little leg length adjustment - a problem on steep or very irregular banks.

After years of trying different chairs as alternatives, for some styles of fishing, to my usual seatbox-type seats, I've realised that for me at least, the common assumption that chairs with backs etc must be more comfortable and better for a back sufferer than the harsh-looking flat seat of a box, just isn't true. I now use two versions of a seatbox -style seat for everything. One is an ultralight canal stool type seat with a very shallow base storage, and this gets used for walking to swims on the river or small river chubbing. The other is the seat-only or seat plus minimal trays part of an Octbox system box. Both have good cushioned seats, relatively small footprint, weigh very little, adapt to all kinds of natural banks and seat you nice and level, at a good height, with no sagging and without trapping you in any position, and in a position to be "on it" for all the things you do when catching fish. Both can be rigged up with wheels, and festooned with attachments according to taste.

I get far fewer back problems with these than I do if I try and fish from chairs, even though that proposition is rather counter-intuitive. 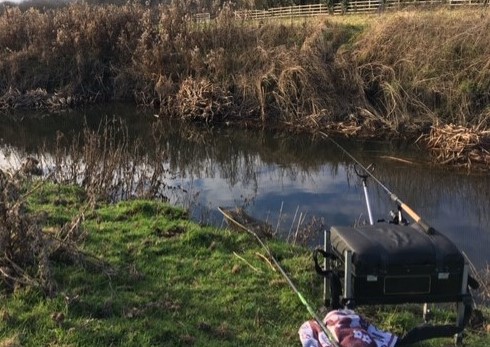 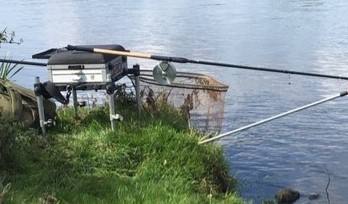 What an excellent, well thought out reply.

Which box is which Kev?
N

john step said:
Which box is which Kev?
Click to expand...

The grey one's the Octbox. You can take those trays off, and I use it with just the seat on for eg barbelling, since I don't need all the stuff in the trays, which relates to fishing for "shoal" fish - little hooks, tiny shot etc.

The black one's a bit of a relic - the 4" base from a Boss Compact Canal box, that I bought in 1990 - something. It had some little drawers on top, but I made a simple lid replacement and added some foam. I can get all the stuff I need in the base, so I don't need a bag with this one.

I have one of those Korum chairs, like it a lot, my back is crocked too! Was lucky to grab an eBay bargain and got it for £67 new. 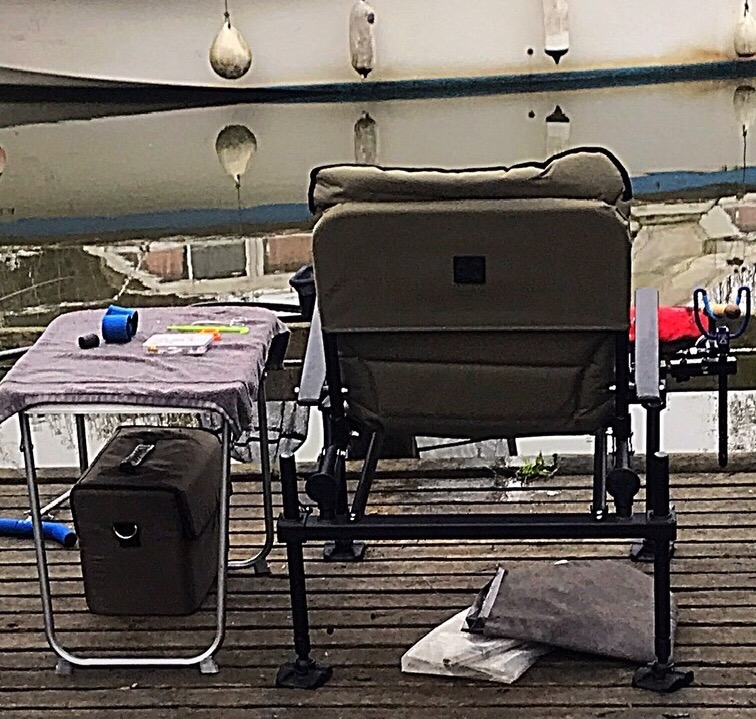 It’s good to hear other people’s experiences, I now mainly fish from a chair as my back gets done in sitting on a box. I used to love match fishing with a pole but packed it all in as my back couldn’t take sitting on a box for 5+hours. I take a Shakey box with Octoplus legs to house all my kit and sometimes pole fish from it for an hour or so before retiring to the chair again. My chair has the scissor mechanism for folding the legs so is virtually useless on a sloping river bank.

I have a few different chairs and full on seatbox to choose from However, as I prefer to take minimal kit, and weight, I invariably use my Browning King Feeder Chair. I very rarely use the footplate though.

The excptions would be long stay carp fishing (dirty great Nash Hi-Back), trotting a river (no seat at all), and pole fishing (proper seat box).
W

I find years of working,standing on concrete floors have made standing,trotting for hours a thing of the past sadly,so I use a Penrose platform,to push my tackle on and to sit on(a memory foam pillow saves the posterior)in a lot of cases,the platform has longish legs(you can buy longer),this year whilst barbel fishing on holiday I've thought the same as you,it's slightly low, I use a korum chair for this,so thought about a daddy long legs type chair,I like the back rest on the chair and it has to be a recliner,so your more upright.
J

Thanks for the feedback guys, I think the Korum is the way forward for me. I'd be interested to know if the chair has a carry bag as I have one for my current chair, and it's handy to put my pan net & unhooking mat in (inside a dustbin liner) too. I did think about a "Daddy Long Legs" chair, but they weigh 9kg!

I also think I need to consider some kind of trolly. Even though I had parked close to my swim on Friday, I made several "runs" to and from the waterside as I just couldn't carry much either.
W

Get a Penrose mate,before you buy the chair,it might save you money in the long run,let us know how you get on and all the best in your search...
J

whitty said:
Get a Penrose mate,before you buy the chair,it might save you money in the long run,let us know how you get on and all the best in your search...
Click to expand...

Surely if I went down that route I'd also have to invest in a box/seat to use with it? I bought some Nash luggage last year with a number of Lemco tackle boxes which will probably not be used if I went that route....
W

I sit on the platform,as I say with a memory foam pillow for comfort,the legs make all but cliffs fishable....have a look online mate...
Ps. I use bungies and put bags,boxes,even holdalls,the lot,so no you don't need to buy a seat box,you need to carry your gear in something.
Last edited: Sep 1, 2019

Me and my mate have this setup, as do others we know, we all swear by it.
YouTube

Another endorsement for the barrow kit for the Korum chair. It's not expensive and it works a treat. I would not be without it. When you get to the peg, you remove the wheel ,the handle and the chair is ready to sit on. Another reason why the Korum chair is so good ..
W

My one is yonks old,is your chair a recliner Mike?

No mine is the basic model which suits me fine. The chair has arms and a barrow kit which are indispensable. I have a couple of other chairs as well.
W