Float fishing on a canal

I'm fairly new at fishing, been going to the same ponds for a few months now float fishing.

I've had some nice carp and bucket loads of bream.

The canal near me is free to fish provided you have a rod licence so I'm gunna try it out soon.

I'm also going to try lure fishing for perch on the canal but that is for another time.

Sent from my SM-G965F using Tapatalk

Sent from my SM-G965F using Tapatalk
Click to expand...

The fish made me do it!

Since you haven’t said what you currently do on your ponds, it’s a bit difficult to say what to do differently :wh

However, there are some generalisations that you can use, but much depends on what you hope to catch, what is in the canal that you’re going to fish and what tackle you have:

As PC mentioned, you’ll be looking to use light tackle – line, floats and hooks.

Spend plenty of time plumbing up: generally canals are shallower on the inside and far side with a channel down the middle.

Fish will generally stay near cover, so any twig sticking out can be a good place to find them, a good overgrown area or tree can be even better.

Fish a few swims from the same place - at least three, but more likely six (using a clock face something like 10, 12 and 2 O'Clock on the inside and far side) with ‘going over’ [to the far side] left until later on and not ignoring under your feet.

Beware: boats can remove all traces of your feed (and tackle) – chose your time to go carefully (early morning is best, be set up before sunrise ideally).

Beware: canal towpaths are very popular with cyclists, walkers (with dogs) and runners etc. so beware of where you put your tackle, I normally leave plenty of room behind me and lay any tackle parallel with the canal) so that I don’t interfere with others and don’t get bothered myself.

Think about what you will do if a boat comes along as they can create quite a flow, lock gates can also have a big effect and act as a warning.

The list of effective baits is endless, but those are my go to baits for canals. It largely depends on what you are hoping to catch, the above will catch all fish that swim in the canal; groundbait can be effective but you do need to be wary of boat traffic so confine its use to early morning.

I hope the following thoughts help? I fish canals quite a lot and find the fishing erratic and sometimes difficult - but very interesting! It's the better roach that I try for .......

Walk up and down (without your tackle) looking for coloured stretches.

Don't use bread or maggots in summer because they will be mullered by small fish.

Some stretches are better than others and some have more signal crayfish!

Find a quiet stretch and lay-on if the water is not moving backwards and forwards because of the blasted boats. If it is moving use hemp and tares just off of the deck.

Match fishing and/or clear water canal fishing can be hard so small hooks and fine lines are then necessary.

If the canal is flowing like a slow river use a small float attached top and bottom and lay-on over depth with the float flat on the surface and a shot 8 inches from the hook - usually the float twitches and then sails under.

Mark Wintle said:
Which canal? There’s a lot of difference between a ship canal like the Exeter canal and a barge canal like the Tiverton canal!
Click to expand...

I'm actually half way between both! So which would you recommend?


Exeter is slightly easier for me to get to, but happy to go either way.

Gaston664 said:
I'm actually half way between both! So which would you recommend?
Click to expand...

I wouldn't have a clue. But this book has a few suggestions. It's not cheap, but your library (do we still have them?) might have/get a copy 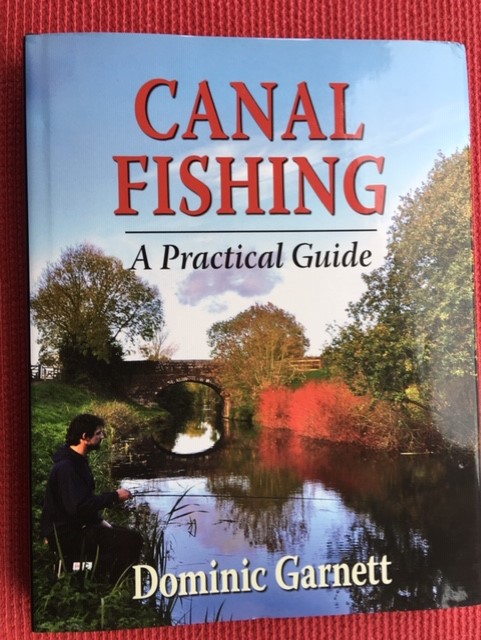 It covers species and tactics in an accessible way, and here are a couple of bits on your area - I think the author is from round there. 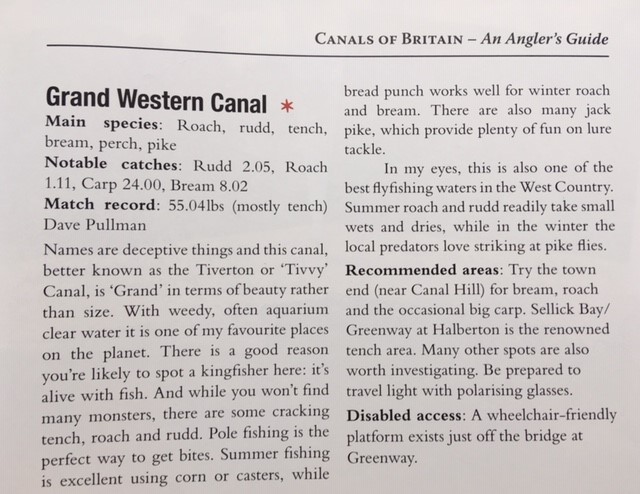 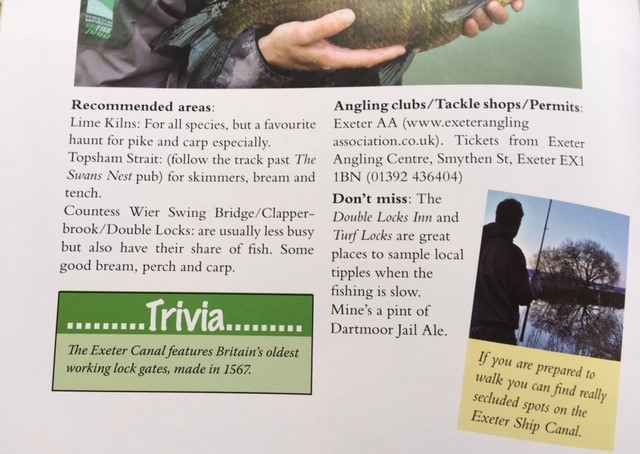 nottskev said:
I wouldn't have a clue. But this book has a few suggestions. It's not cheap, but your library (do we still have them?) might have/get a copy

It covers species and tactics in an accessible way, and here are a couple of bits on your area - I think the author is from round there.

Thanks for sharing that! I'll see if I can source a copy of the book.

Sent from my SM-G965F using Tapatalk

I only fished the Tiverton Canal once and that was in a match and where I drew had been polluted so we could only catch tiny pike. I remember that it was noted for tench so local advice might help, used to be Tiverton angling club. On the Exeter Canal I did well on the pole for roach with maggots but some areas had bream worth fishing for on the feeder, ask in Exeter Angling Centre for advice and I believe you will need a day ticket. Don’t know who proof read that book but it’s Countess Wear!
You must log in or register to reply here.
Share:
Facebook Twitter Reddit Pinterest Tumblr WhatsApp Email Link
Top