I cannot fault the concept of spool reducers and would like to buy a couple for my Stradic C14 ra 4000. I can find spools for the 2500 size but not the 4000 on eBay. Does anyone know of a source.

Try; “The Tackle Box” at Dartford Mike. They sourced some Shimano spools for me last year. They were very helpful. Most or all of their staff are anglers so you don’t end up with a dipstick who has zero product knowledge.


Sent from my iPhone using Tapatalk

Cheers Ray. They haven't any in stock but have ordered some for me from Holland with their regular order.

Tacklebox couldn't have been more obliging and are an excellent company to deal with.
Last edited: Feb 5, 2021
R

Why do you need spool reduces? if they are to make the spool shallower then I use a fly backing line.
I did all my spools years ago, so long as I use the same diameter lines there's no problem.

The Shimano reducers are inexpensive, work a treat and are just easy. They come with the reel as standard but not with spare spools.
A

There will be somebody out there knocking out 3D printed versions.

Not on eBay.
R

I was unaware of spool reduces, My spools backed with fly backing line have lasted years. I only have a couple of Shimanos the rest being Drennan.
I bought a bulk spool around 30yrs ago there's still plenty left.

rayner said:
I was unaware of spool reduces, I only have a couple of Shimanos the rest being Drennan.
Click to expand...

Spool reducers are only available for certain models. The Stradic Ci4 RA, Super GT-RD and the Aero Match/Feeder (and variants) in normal coarse/match sized reels. The latter have been discontinued anyway. Beyond that, you are looking at Big Pit/Mini Pit sized reels.
Don't be tempted to try and buy them for any old Shimano reel, they won't fit most standard sized spools. They certainly aren't universal.
R

Spool reduces are not a product I would ever buy, so far as I'm concerned fly backing line can't be bettered. The Shimanos I own are mini bait runners.
Of course, Shimano owners may use them and that's their choice.

So kind Gary. As a set are included with a wide variety of Shimano reels as mentioned by Sam,it would be daft not to use them.They clip into place and can be removed very simply and save line. I like them hence why I've bought more for spare spools. They cost £2 each so not expensive.
R

Like I said Mike, I loaded my spools with fly line then super glued the end to save it from ever coming off, I know exactly how much line they hold on top of the backing. It's just my choice, I understand any methods used by others, so long as the line is loaded correctly is all that matters.

In fact on some of my reels I’d rather spend the extra cash to fill them up completely from bulk spools to negate the need to load a seperate backing line on them first; but that’s basically because I’m a little bit too lazy.

In the picture is one of my reels that is fitted with a line reducer (it has different sized line reducers on both of its two spools), and what could be easier and less time consuming than simply just clipping a line reducer on the spool (if the reel has them) even more so because spool reducers are only a couple of pounds each 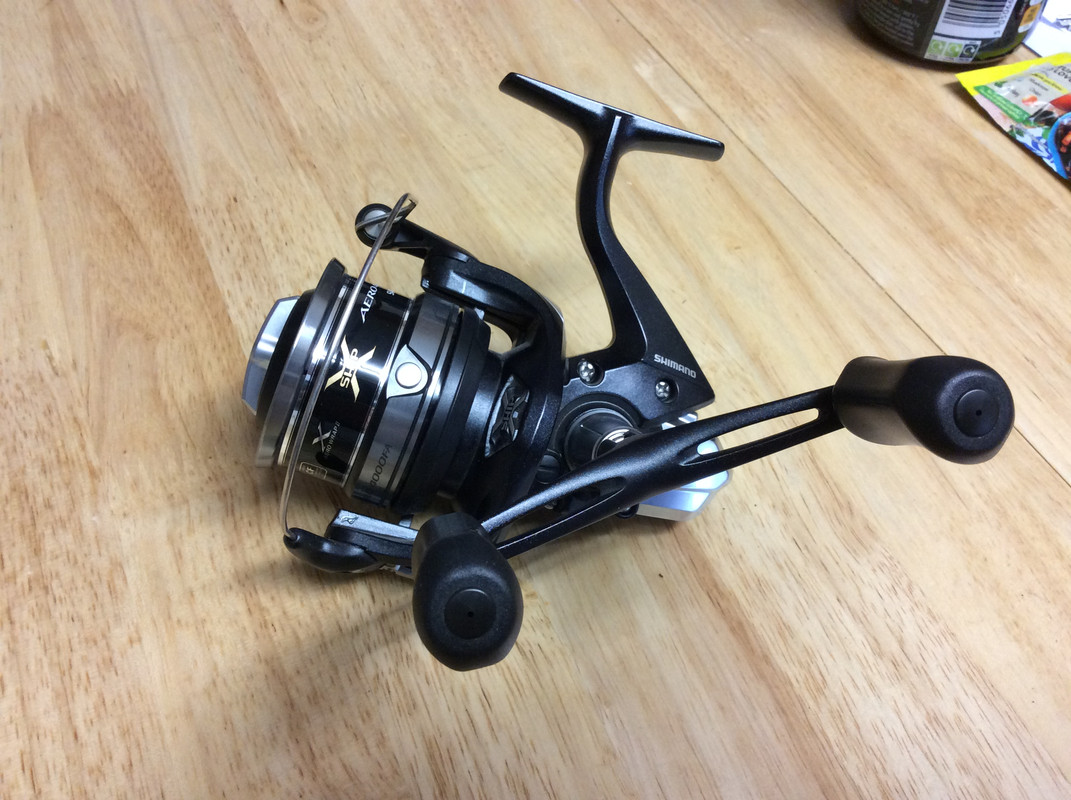 I wouldn’t mind betting that someone could make pounds if they could sell line reducers for all of the most popular reels; I would certainly buy them, that’s for sure

They may not be absolutely necessary but they do make life a bit easier when people are loading up their spools with line.

Why do reel manufacturers insist on providing such huge spools.

Good question. It sells more line and we, the mugs, are cajoled into thinking we need 300 meters of line on our float reels.

The main reason for such deep spools is that the international brands are making spinning reels for a far broader market than just the UK. Most UK coarse anglers fishing in a style derived from match angling. Some of the bigger foreign worldwide brands did make shallow "Match" spools specifically for the UK/European match fishing market in the earlier periods of their availability. After that, only certain models within a range had shallower (still not as low as the 100 yard(ish) capacity that we tend to want). Only in more recent years have they started to offer shallower spools again. However, that's largely down to the use of braid becoming more prevalent in the worldwide spinning markets.

If you want a shallower spool, pick very carefully from the big name brands or find one of their reels that's supplied with spool reducers. The alternative is to look to UK focussed brands such as Drennan. They still do proper shallow match spools.

sam vimes said:
The main reason for such deep spools is that the international brands are making spinning reels for a far broader market than just the UK.
Click to expand...

Even though the spools are made for foreign markets; surely 300mtrs or more of line capacity on a small to medium sized reels spool is far too much line for any type of fishing; isn't it?

So why do they need to have these very deep spools? Unless it is so that they can just sell more line to the gullable anglers all over the world?

Keith M said:
Even though the spools are made for foreign markets; surely 300mtrs or more of line capacity on a small to medium sized reels spool is far too much line for any type of fishing; isn't it?

So why do they need to have these very deep spools? Unless it is so that they can just sell more line to the gullable anglers all around the world?

You'd certainly think so, but I've seen very little evidence of anyone but UK (and a small number of European match) anglers and, more recently, braid users complaining. I also don't understand why any freshwater angler buying a relatively small reel might need such great line capacities. I'm not convinced about the line sales thing, though some reel manufacturers may not complain. I believe that it's simply down to providing what the majority of worldwide buyers appear to want and everyone else having to make do. Perhaps if buyers would actively stop buying reels with deep spools, or at least seek out the variants with shallower spools/reducers, they'd take the hint. Sadly, most don't seem bothered enough to do so.

I have a Drennan Reel with great shallow spools just a shame about the reel.
D

It’s just illogical to supply a 3000 size reel with a spool that holds 350m of line, it’s out of casting range, your not going to be using high (thick) breaking strain lines on it because the clutch would hold inadequate drag for the bs.