I took the advice offered on this thread and made some dead cows from 2mm lead sheet. I cut the profile out from a piece of lead sheet, 8cm x 10cm, then folded it under pressing and flattening it with a hammer. Took me around 20 minutes to make three. The end result weighed 2oz and looked like this: 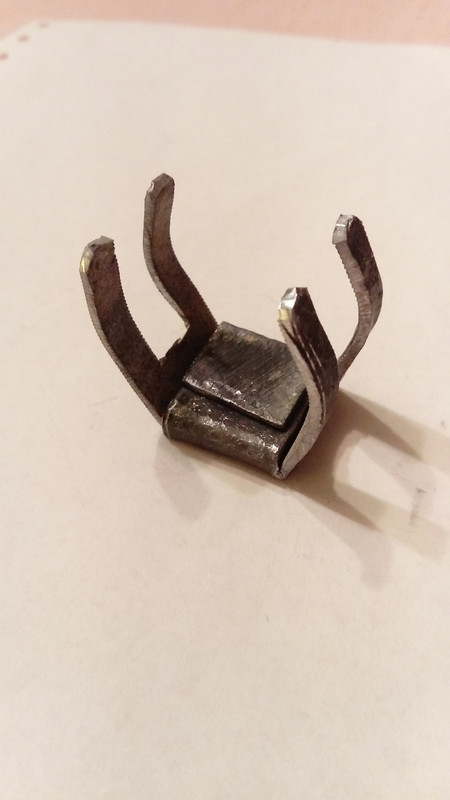 I used one on the River today, with a Drennen black cap maggot feeder and it worked a treat. I am going to make some half oz and quarter oz strap leads, using the same principle. If they works as successfully as the dead cow, it will save all the hassle of frigging about with molten lead and castings. Pete.

That looks and sounds good Pete, easier and cheaper too, as is often said; where there's a will there's a way.

Glad to have helped although much neater than my attempts which do work though.

bracket said:
Thanks for that Mark. I have done a similar thing to cast big river plummets. I used a block of Plaster of Paris and ground the shape out with a tapered stone. Worked OK. When I lived in the Midlands a friend of mine, Dennis Fox, (hence the ID "FOXY" on the strap in the photo) made me a set of metal moulds for leads up to 2ozs. They were ideal, particularly as another friend was a roof felter and supplied me with off cuts of lead flashing. I cast them like shelling peas. Somewhere along the line I lent the moulds out, never to be returned. That's life. Pete.
Click to expand...

You're all sorted now Pete and no frigging about as you say. Good job!

However for those who are interested in making their own lead shapes, you can make a simple mould box of one or even two halves aka a 'flask' whereby your drafted pattern can be reproduced easily with green sand for lead/metal pouring.

To make green sand, all you need is some kitty litter (leam) powdered up in a blender, added to some play sand.
Add a bit of water to make it slightly damp until it just clumps together, as you would when making up a ball of groundbait.
You'll likely find some instructional how-to's on Youtube.
R

Hi bracket. I make my own dead cows. Not sure what they weihgh, but I do them in four sizes, designed to fit the old small Thamesy blockend feeders. If you are visiting family in Nottinghm, you are welcome to swing by and collect as many as you like for nowt. Regards, Dave.