How did you get on?

I haven't fished the Sufflolk Stour in many years use get some good catches of fish at Glemsford, Henny and Pitmore lock,

Fished a club fixture today, lovely day and all that.. Really struggled for 2:3:0 of small dace, perch and roach on stickfloat. Spent a good while watching the bloke on the next peg hauling 10 slabs out on the pole with maggot.
49lb and absolutely pissed it.

Returned to same spot to see if I could do better. Wind was still an issue but not going 6 ways at once like yesterday. Took bread and it prompted some early roach. Size was down on usual. Low flow many paddles and a storm of bleak saw me heading home early. Some rain and colour needed urgently. Only 2 more sunny days forecast so expect it to be far less appealing to non-fisher types very soon. Finally!
Stratford is venue btw. Was up Henny way last month. Too hectic there also. Come rain, come wind and blow these people home!

Beautiful morning this morning so decided to have another go on the usual area on Loch Bracadale. Nice ride over the hill road, got there about 10 and looked like had the place to myself again as locked bike to usual post. Walked the half mile to the point to find four anglers already there on the East (deeper and better) end of the point- apparently they'd left their cars a few hundred yards along from the usual parking spot as they didn't want to risk their paintwork with a herd of cows looking over the fence.
Up to that point they only had a couple of small whiting between them
Have always been told this is a popular and well known mark but this is the first time I've actually seen anyone else there.
So, back to the West side, a good bit shallower and a lot more kelp close in, but a 70 yard chuck still found a decent depth of water with the tide an hour down. Usual set up for here, mackerel strip on a running ledger with 4 ft tail . Second cast, rod hooped round and handle was spinning which looked promising but no, just the inevitable dogfish

Added another the same size an hour later to a less dramatic bite but all activity ceased as the tide dropped and spent the last four hours just feeding the occasional crab. Thought of moving back halfway along where the water would be deeper and would now be able to fish over what is a nasty ledge until half tide down, but the lads on the deep bit weren't catching either (two doggies and a few little whiting between them, and a complete absence of mackerel) so stayed put. Thought might be some improvement as it clouded over, but no.

Not much about in the way of wildlife, skein of Pink Foot geese heading south and a couple of rock pipits keeping me company all day

As I'd done the logo for the event I thought it would be rude not to remotely attend.
Really nice to see such a variety of (mostly SW species) next to my art work popping up across social media.
Me and a couple of mates went for silverfish on the lure, and succeeded 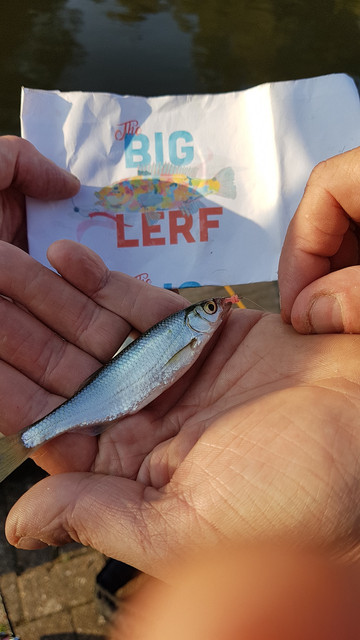 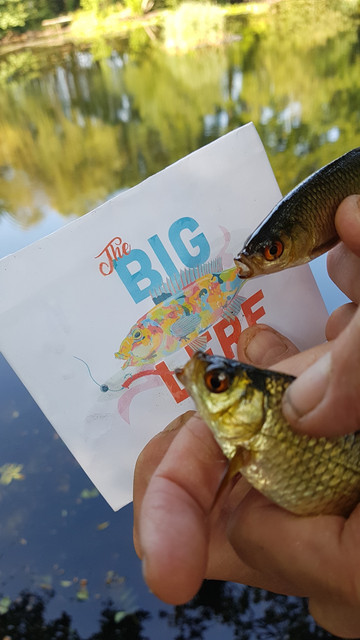 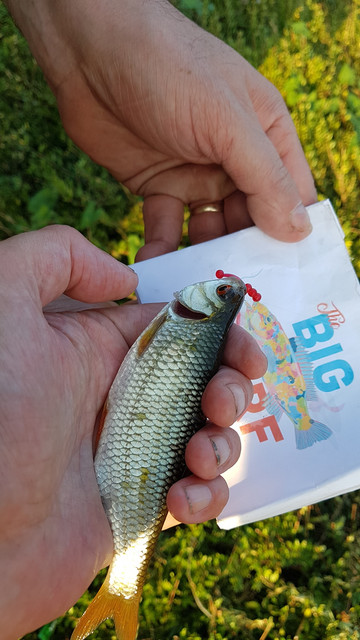 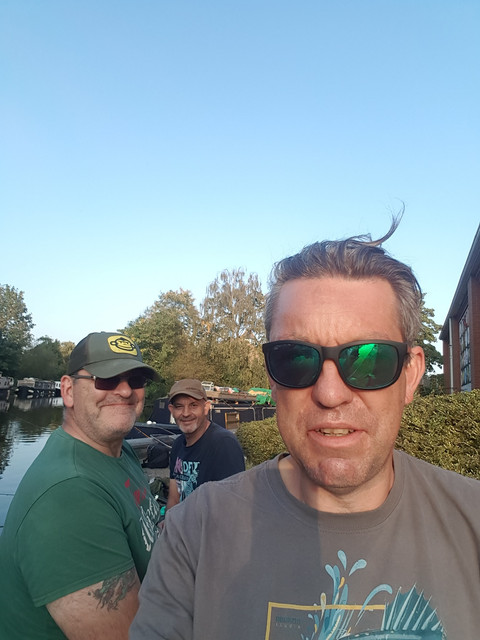 Popped out to the river today, spent most of my time bailiffing and chatting with people I know. Tried one stretch for literally 10 min's as that horrible downstream northerly wind was still blowing and decided to go back to the car and make a move down stream to another stretch on another club ticket. Unfortunately someone was already in my planned spot but I had a back up swim a few hundred yards lower down river. Anyhow, at the spot it was a case of wading across the river on very slippy boulders which was a propper PITA. From there I casrt as close to the opposite bank as I could and trotted down it. I had a chub a trott, and that's not exagerrating. Most of them were about ten ounces to a pound and a few were about two to two and a half pounds.
No pic's as it was too much hasstle!

I had a short session this afternoon doing a little waggler fishing on a local club water with my son. 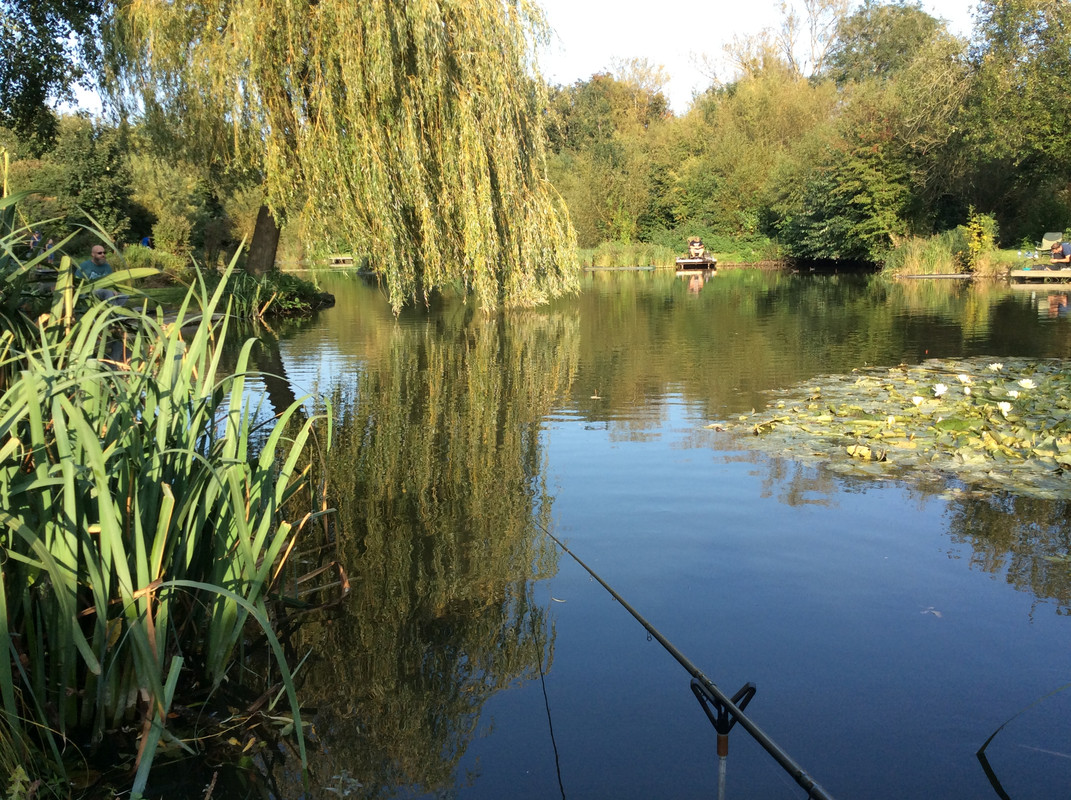 It was a nice change to be fishing out of the wind which has been incessant over the past couple of days and we were catching lots and lots of smallish Roach, plus a few small Carp plus a nice surprise Tench on a nice warm evening. 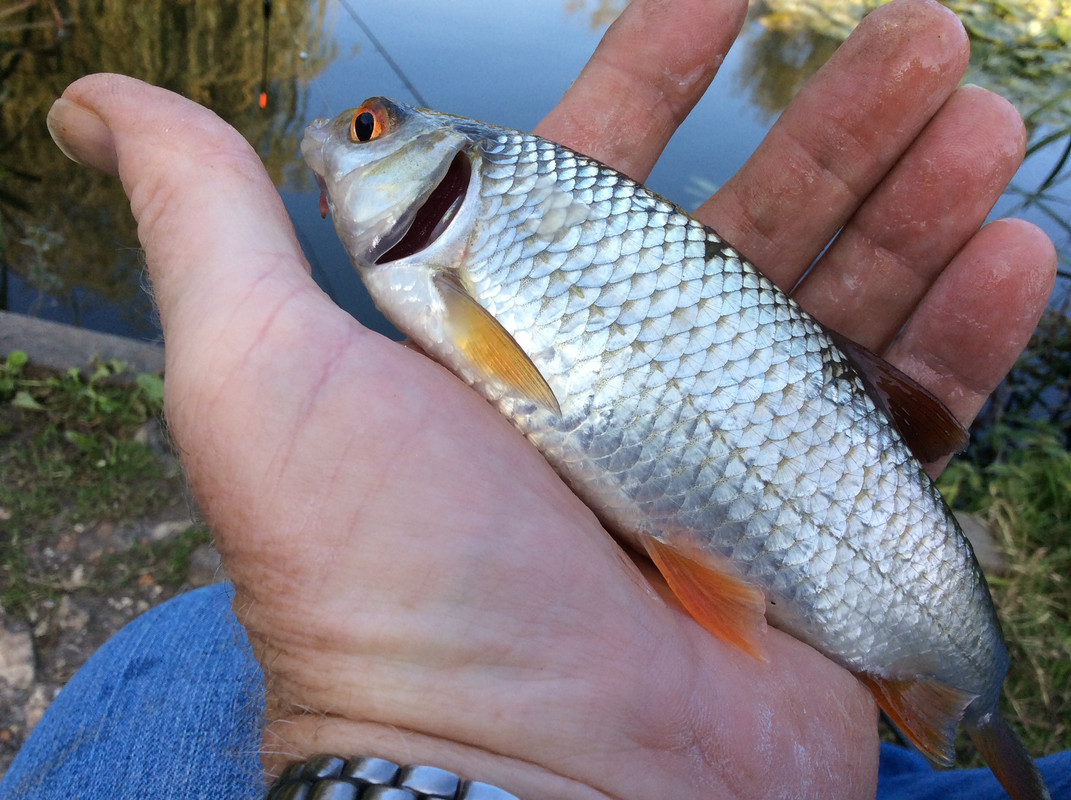 We were catching these nearly every cast. 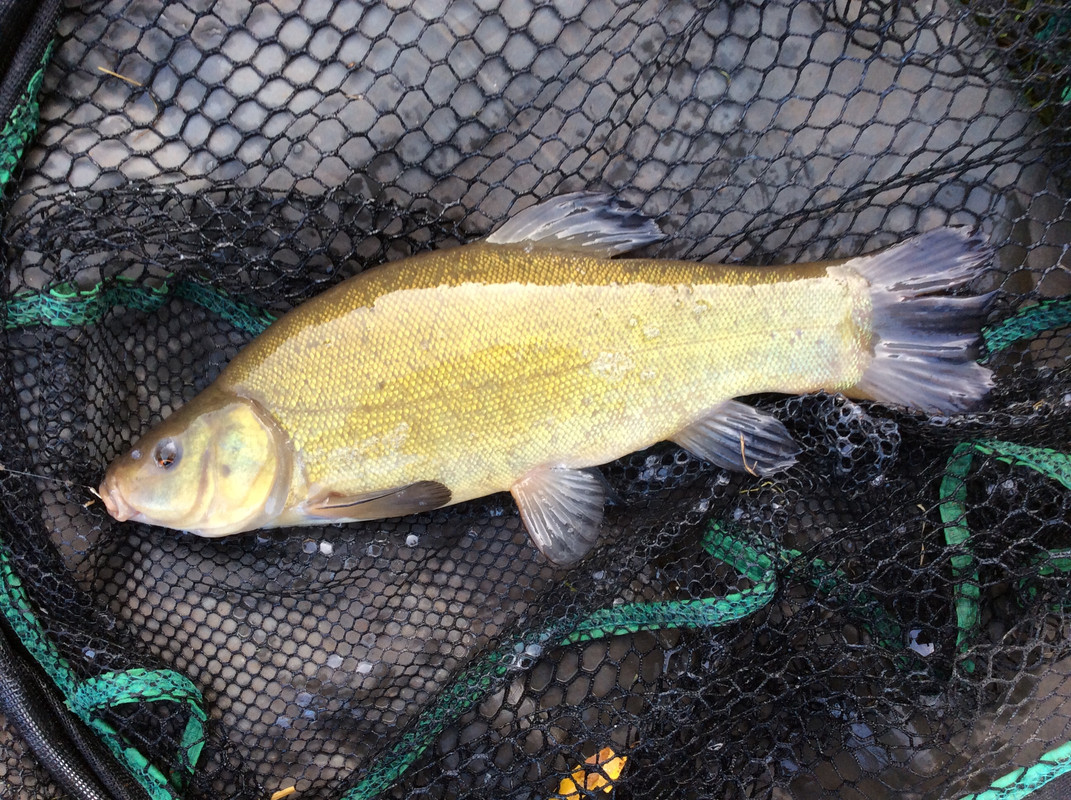 The surprise Tench which is my favourite species.

Plus we had a few of these between us.

I have not had the chance to fish for a couple of weeks, meant to be roach fishing but what with one thing and another however, did have a saunter along the pier today, quite a few fishing. Surprised to see two mackerel being pulled up on lugworm, one they have been absent for quite a while now and two, don't see them caught on lugworm, in fact I think that's the first time I have seen it but, I am sure it happens now and again like today.
Two dover soles, a plaice and a ray of some sort earlier on the incoming, also don't see them that often off the pier, probably a thornback. An 8lb conger was caught last week as well, not many of them about as a rule but there should be. Also a few reports of cod coming up, local anglers are talking of a revival, I am not saying it, been there too often before but you never know; stranger things have happened at sea..

Some lovely fish being caught and in glorious sunshine which makes a nice change for late September . Sadly it won’t last so make the most of it

It was back over the fields this afternoon for a bit more stick trotting on one of the small rivers although the wall to wall sunshine didn’t exactly set the heart pounding. Lugging the old Microlite2000, pin, small bag, net and mat the target was roach – and after a couple of sessions fish spotting last week I was confident that i knew exactly where they were. Wrong – after 3 hours trotting and moving for just a few bits luck would have it that I located some better fish in a place they don’t usually frequent. Anyway, seven decent fish in the last hour was a relief – fished from 12.30 – 4.30.

I've been fishing regularly enough recently, but I've struggled for the enthusiasm to post. I simply can't be bothered to post about bits, even lots of them. Apart from an accidental pike, and a couple of trout on the Swale, I haven't had a fish over 2lb since the beginning of June.

Today was going along similar lines, plenty of good dace, decent roach, perch, grayling and chublets. However, I latched into something that really pulled back. Initially, it bored away like a big chub. Some headshaking had me thinking big perch or maybe a whopping grayling. It waking up and going on surging runs had me thinking barbel. I was even more hopeful of that when I saw a long lean fish through the Tees peat stained murk. Sadly, it was none of those things. I'm actually almost disappointed that it was a salmon, well, I think it's a salmon, I'm no expert.

Whatever it is what a great looking fish, the span of its tail compared to its body! no wonder if put up a spirited fight.

As it was 3lb 1oz, quite probably, but a grilse, as far as I'm aware, is still a salmon. All I'm bothered about is whether it's a salmon or a sea trout.

The tail is noticeably concave, this is the easiest way to identify it as a salmon.


Sent from my iPad using Tapatalk

Plenty of Salmon showing in the Trent in recant weeks!!
P

I have been on the Thames with ok results but nothing of note. We need some rain to liven things up a bit. Yesterday afternoon until dark I fished an estate lake. Only one there so I raked a swim and started by float fishing flake - no bites. Swapped to three dead maggots and caught a tench, 3 roach, a rudd and a perch. The fish were beautifully coloured. I sat there, it was just so quiet, the lake was totally calm, lots of lily pads, swooping damsel flies, no distant road noise, no trains - just birds and the occasional plop of a falling acorn.

sam vimes said:
As it was 3lb 1oz, quite probably, but a grilse, as far as I'm aware, is still a salmon. All I'm bothered about is whether it's a salmon or a sea trout.
Click to expand...

As Ray says, it has a V in it's tail rather than it being square as a sea trout is.

First trip onto a river this season, I spent the afternoon on the Soar near Barrow. Quite a few small fish mainly dace I think ? Maybe someone can tell me? anyway lots of bites but not so many hook ups. I did enjoy the change and I had company of a young duck I just could persuade to bigger off so I gave in and fed it a steady stream of maggots at my feet while I catapulted free offerings to the fish further out. 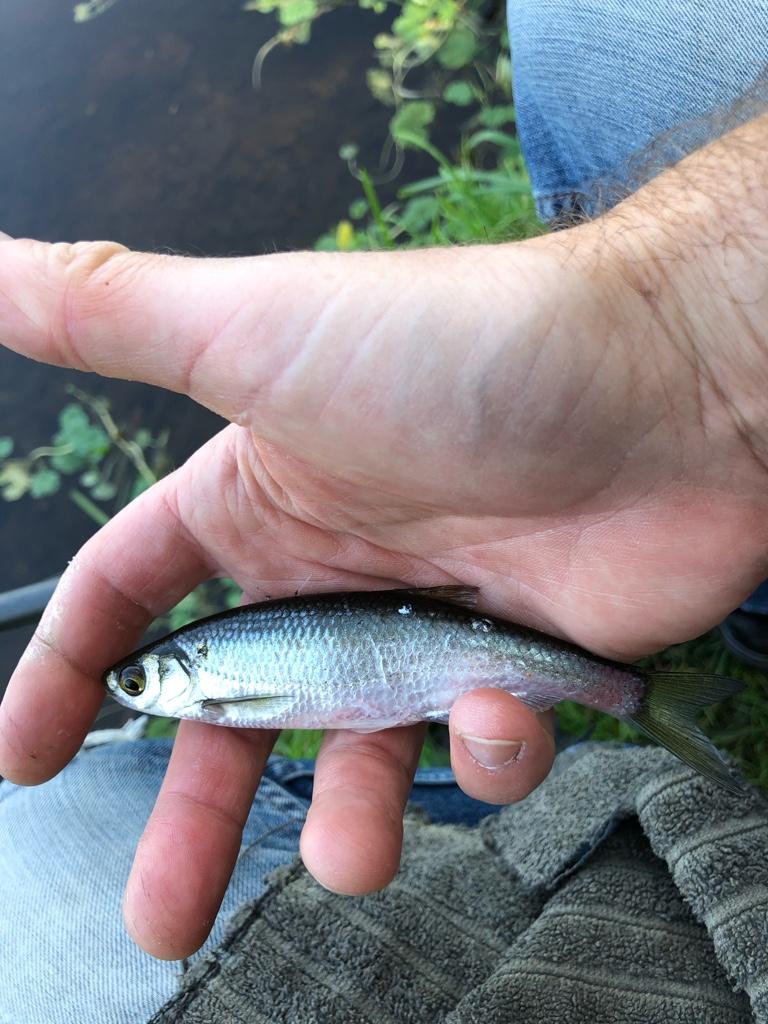 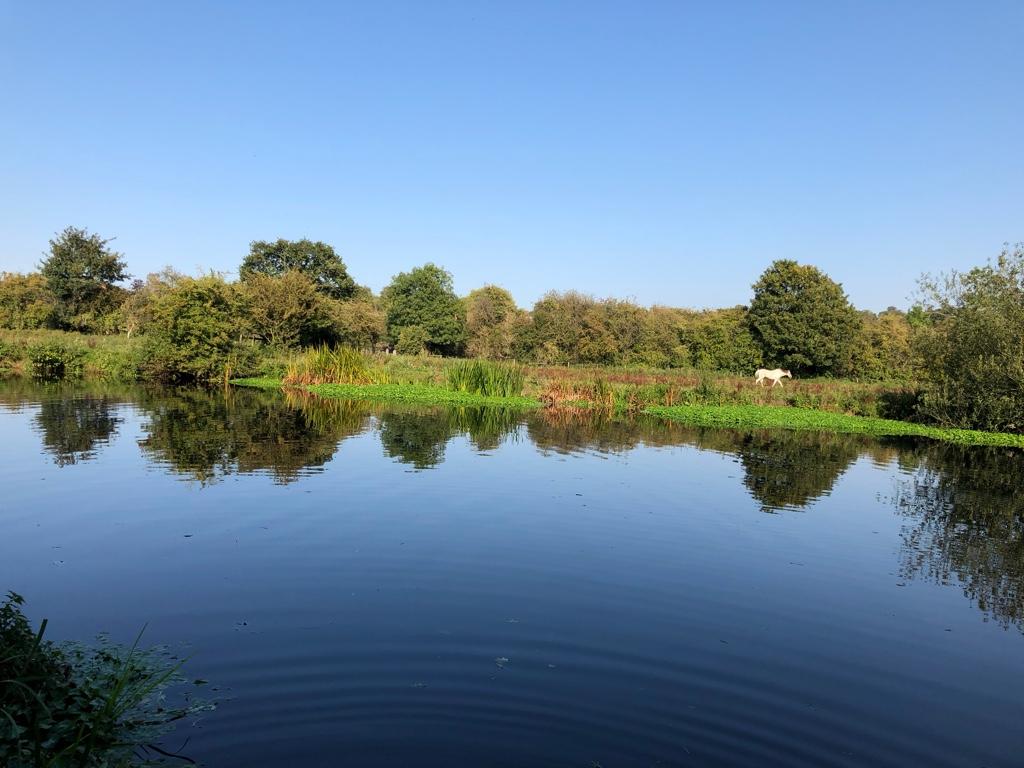 A few small roach amongst the others
And “that” duck! 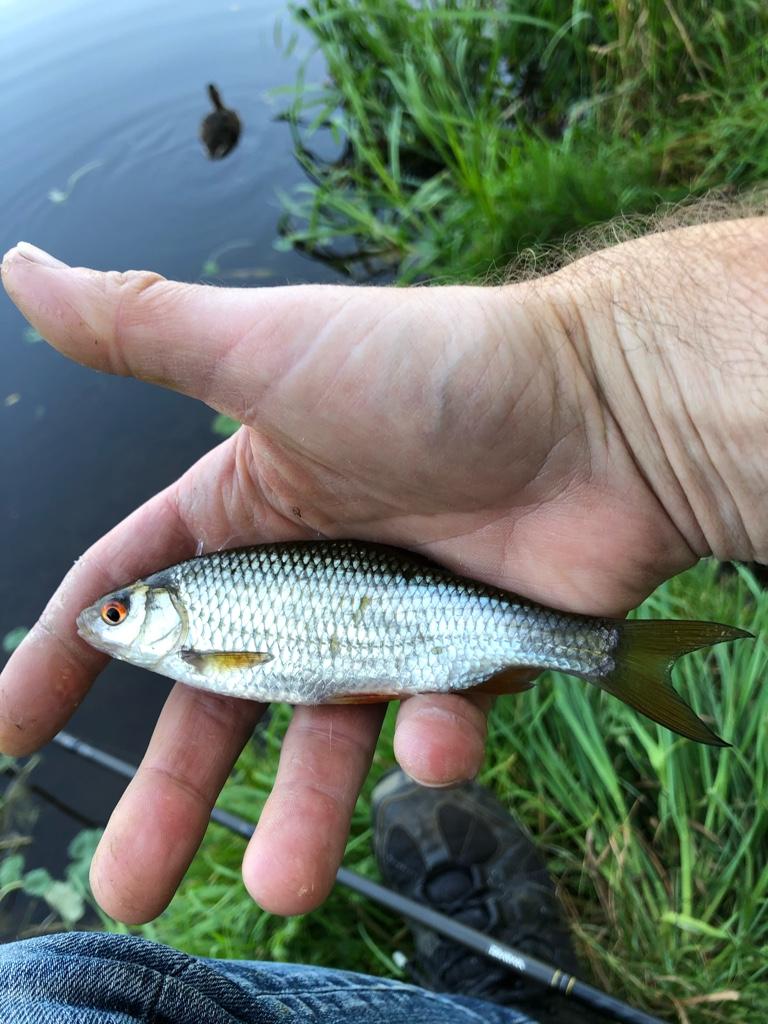